Angel Musicians Angels are pure spirits, created by God. They contemplate His glory and sing His praises. The liturgy celebrated by the Church on earth is a participation in this heavenly liturgy:

“I saw the Lord sitting upon a throne, high and lifted up ; and the train of his robe filled the temple. Above him stood the seraphim. (…) And one called to another and said: “Holy, holy, holy is the Lord of hosts ; the whole earth is full of hos glory !” (Isaiah 6:1-3) 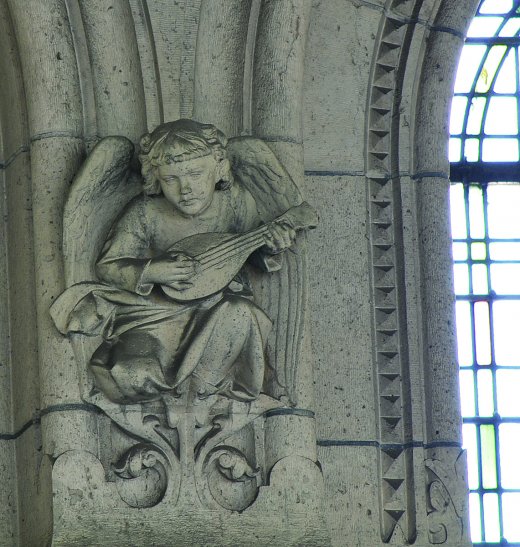 Guardian Angels They are sent by God to watch over each of His children along the road that leads us to Him:

“See that you do not despite one of these little ones. For I tell you that in heaven their angels always see the face of my Father who is in heaven.” (Matthew 18 :10) 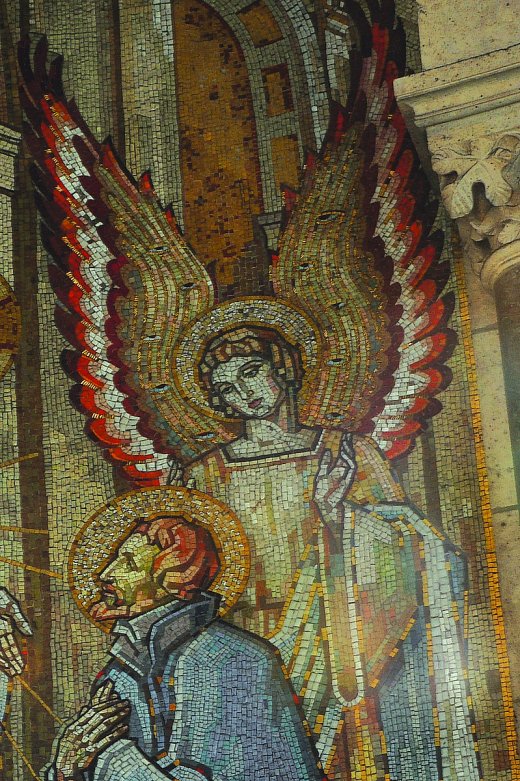 Archangel Gabriel When we say the Hail Mary (AVE MARIA), we repeat the words of the Angel Gabriel to the Virgin Mary at the Annunciation:

“The angel Gabriel was sent from God to a city of Galilee named Nazareth, to a virgin betrothed to a man whose name was Joseph, of the house of David. And the virgin’s name was Mary. And he came to her and said, “Greetings, O favoured one, the Lord is with you ! (…) And behold, you will conceive in your womb and bear a son, and you shall call his name Jesus”.” (Luke 1:26-31) 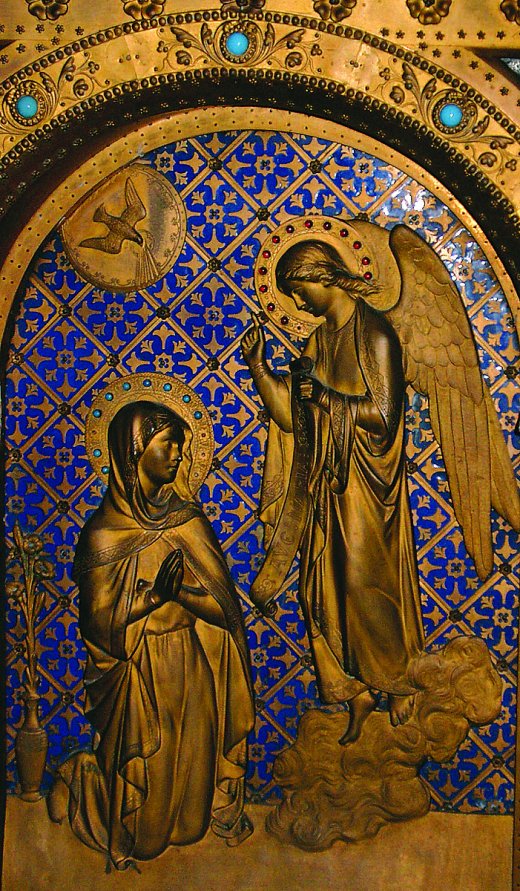 Angels of the Adoration In the apse two statues of angels support the monstrance containing the consecrated Host, the Body of Christ. It is “the Word made flesh” (John 1, 14), “God with us” (Matthew 1, 23). As at Christmas at the birth of Jesus, the angels surround the Body of Christ with adoration:

“The angel said to the shepherds: “Fear not, for behold, I bring you good news of a great joy that will be for all the people. For unto you is born this day in the city of David a Savior, who is Christ the Lord. And this will be a sign for you : you will find a baby wrapped in swaddling cloths and lying in a manger.” And suddenly there was with the angel a multitude of the heavenly host praising God and saying, “Glory to God in the highest, and on earth peace among those with whom he is pleased!” (Luke 2:8-14) 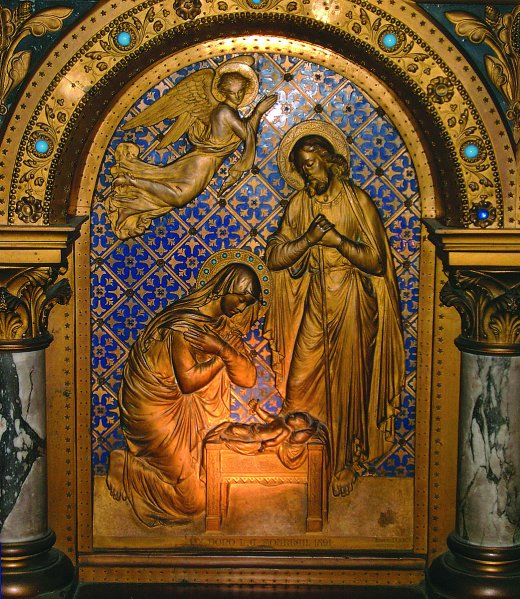 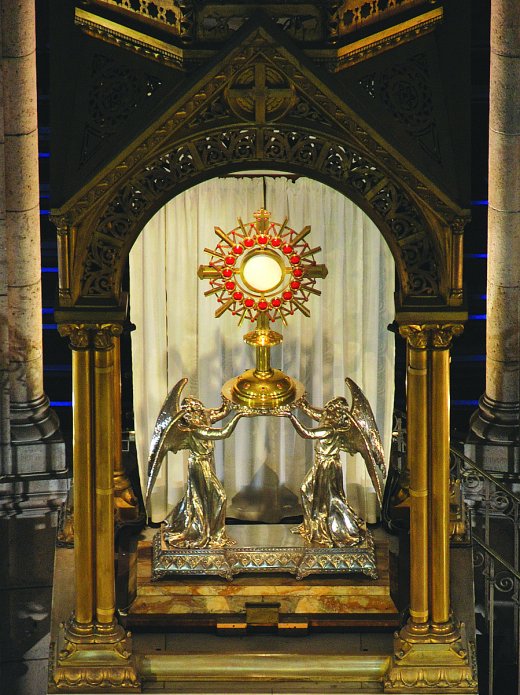 Angels of the Passion The angels represented in the cupola present to us with deep respect the instruments of the Passion of Christ, signs of the greatest love (cross, spear, nails, crown of thorns, sponge soaked in vinegar…):

“Jesus came out and went, as was his custom, to the Mount of Olives, and the disciples followed him. And when he came to the place, he said to them, ‘Pray that you may not enter into temptation.’ And he withdrew from them about a stone’s throw, and knelt down and prayed, saying: ‘Father, if you are willing, remove this cup from me. Nevertheless, not my will, but yours, be done.’ And there appeared to him an angel from heaven, strengthening him.” (Luke 22:39-43) 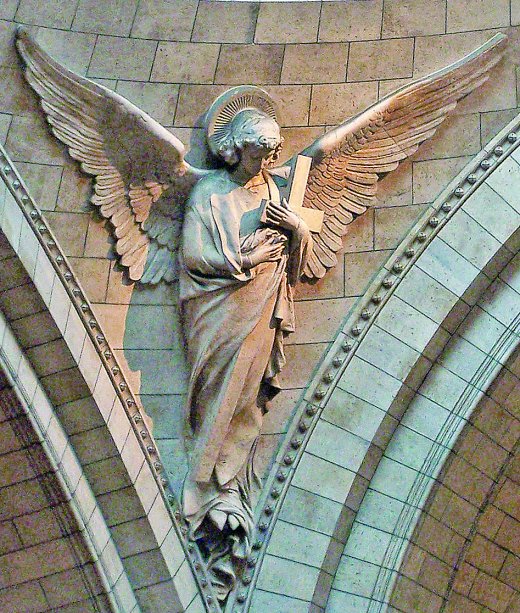 “On the first day of the week, at early dawn, the women went to the tomb, taking the spices they had prepared. And they found the stone rolled away from the tomb, but when they went in they did not find the body of the Lord Jesus. While they were perplexed about this, behold, two men stood by them in dazzling apparel. And as they were frightened and bowed their faces to the ground, the men said to them: ’Why do you seek the living among the dead? He is not here, but has risen’.” (Luke 24 :1-6) 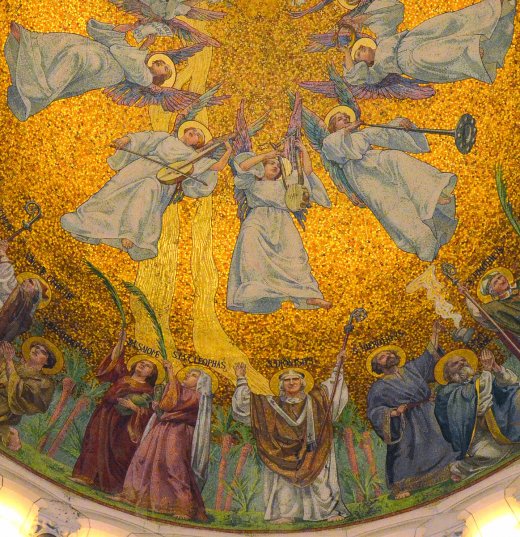 Demons They are angels created by God, but who rebelled against Him through jealousy, choosing hatred rather than love and seeking to drag mankind in their wake. They are represented by grotesque forms and gargoyles, expelled from the Church. They were vanquished through the love of Christ raised on the Cross and banished from the heart of man at Baptism: 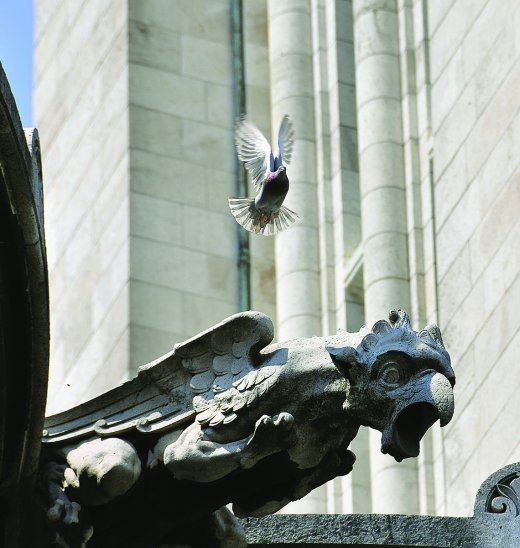 Devil “Father of lies”, “he who divides” and seeks to separate man from God, he is represented in the form of a vanquished serpent under the feet of the Virgin Mary, as in the biblical prophecy:

“The Lord said to the serpent, “Because you have done this, cursed are you above all livestock and above all beasts of the field; on your belly you shall go, and dust you shall eat all the days of your life. I will put enmity between you and the woman, and between your offspring and her offspring; he shall bruise your head, and you shall bruise his heel.” (Genesis 3:14-15) 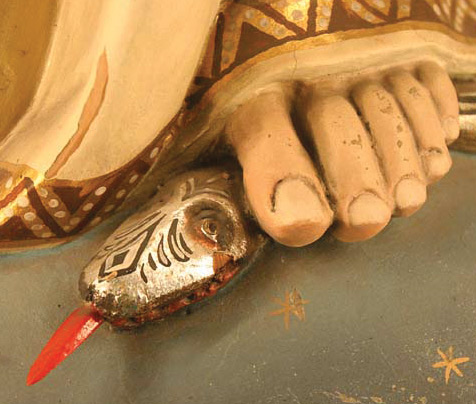 Archangel Michael He is the protecting angel of the Church and helps the faithful in the spiritual combat against Evil:

“Now war arose in heaven, Michael and his angels fighting against the dragon. And the dragon and his angels fought back, but he was defeated and there was no longer place for them in heaven. And the great dragon was thrown down, that ancient serpent, who is called the devil and Satan, the deceiver of the whole world (…). And I heard a loud voice in heaven, saying, “Now the salvation and the power and the kingdom of our God and the authority of his Christ have come, for the accusers of our brothers has been thrown down, who accuses them day and night before our God.” (Revelation 12 :7-10) 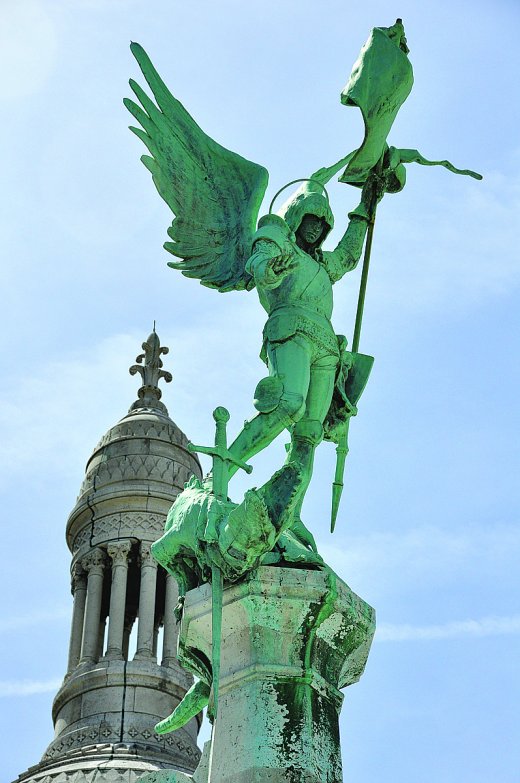 Lamb Symbol of innocence and gentleness, it represents Christ who gave up his life for the salvation of the world: “Behold, the Lamb of God, who takes away the sin of the world !” (John 1:29) 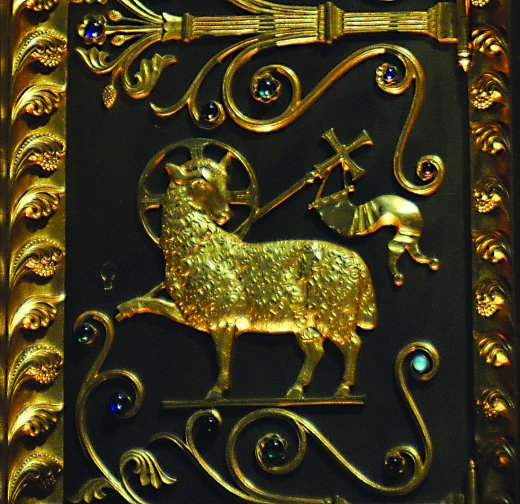 Fish Jesus multiplied the loaves and fishes to feed the starving masses, thereby announcing the gifts of the Eucharist (John 6, 8-11). The fish became the sign of recognition of the first Christians, for the letters of the Greek word ΙXΘΥΣ (‘ICTUS’, fish), are the initials of the confession of the faith: “Jesus Christ, Son of God, Saviour”. 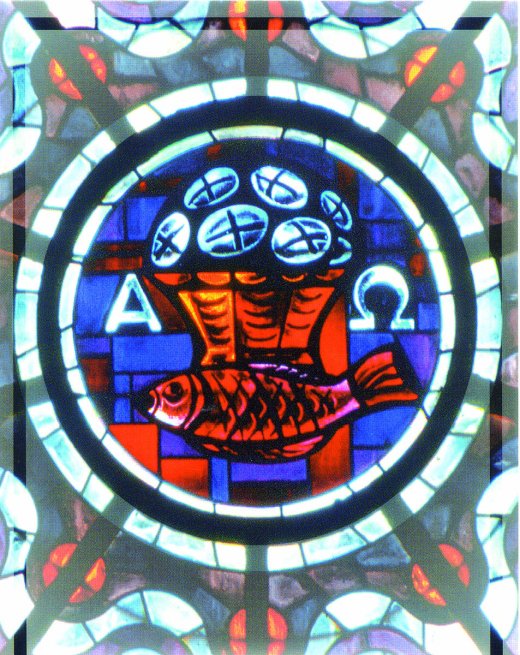 Pelican Represents Christ who in the Sacrament of the Eucharist gives his Body and Blood as food. In Antiquity, it was believed that the pelican fed its young with its own flesh: “My flesh is true food, and my blood is true drink. Whoever feeds on my flesh and drinks my blood abides in me, and I in him.” (John 6:55-56) 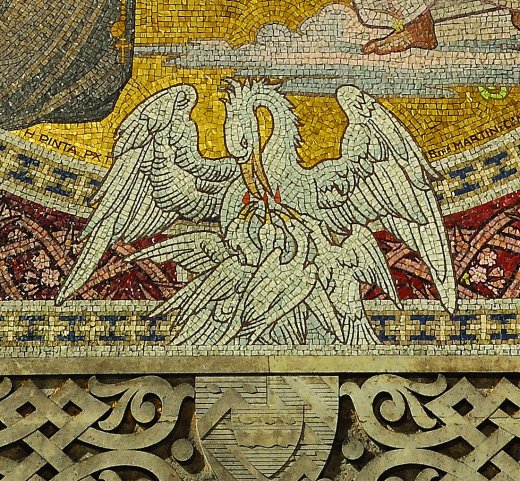 Phoenix This bird of Greek mythology with the ability to arise from its ashes has become the symbol of Christ’s resurrection from the dead: “The Son of Man is about to be delivered into the hands of men, and they will kill him, and he will be raised on the third day.” (Matthew 17:22) 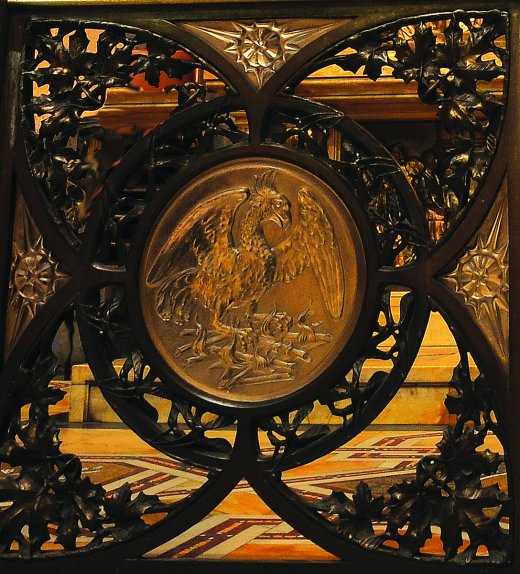 Hen Symbol of the maternal concern of God for his people exposed to danger: “O Jerusalem, Jerusalem ! (…) How often would I have gathered your children together as a hen gathers her brood under her wings, and you would not !” (Matthew 23:37) 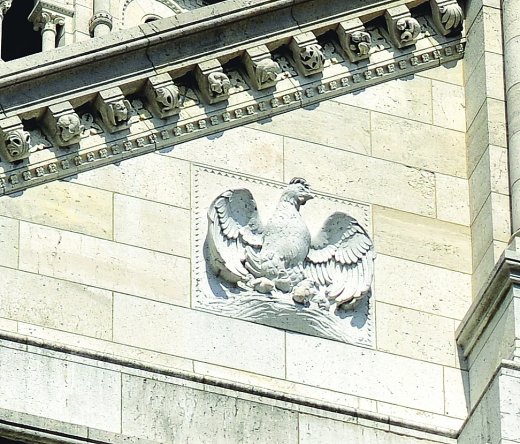 Eagle Symbolizes the protection God affords his people during their earthly passage, as for the people of Israel in Exodus: “Like an eagle that stirs up its nest, that flutters over its young, spreading out its wings, catching them, bearing them on its pinions, the Lord alone guided him.” (Deuteronomy 32:11) 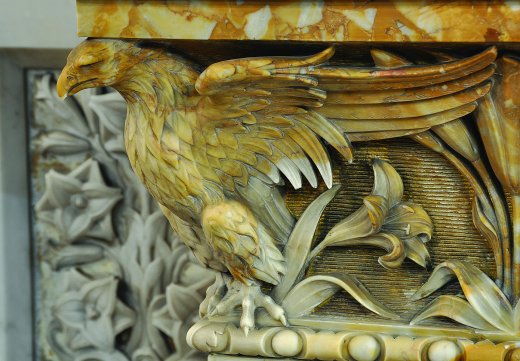 Cock Recalls the threefold denial of Peter during the Passion of Jesus: “Truly, I tell you, this very night, before the cock crows, you will deny me three times.” (Matthew 26 :34) 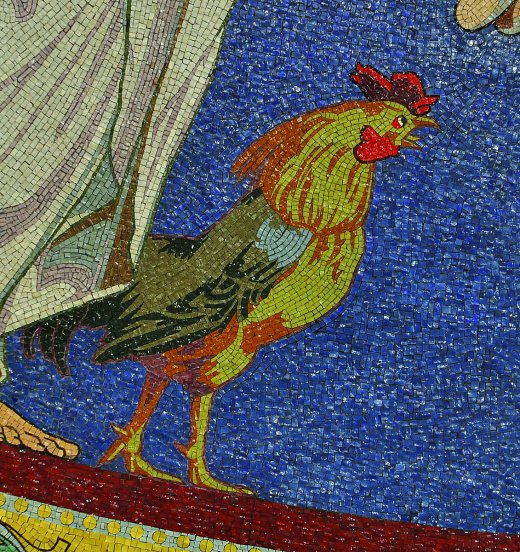 It is also the symbol of the Resurrection of Christ on Easter morning: “Therefore stay awake – for you do not know when the master of the house will come, in the evening, or at midnight, or when the cock crows, or in the morning.” (Mark 13:35)

Deer Symbolizes the desire for God in prayer: “As a deer pants for following streams, so pants my soul for you, O God.” (Psalm 42) 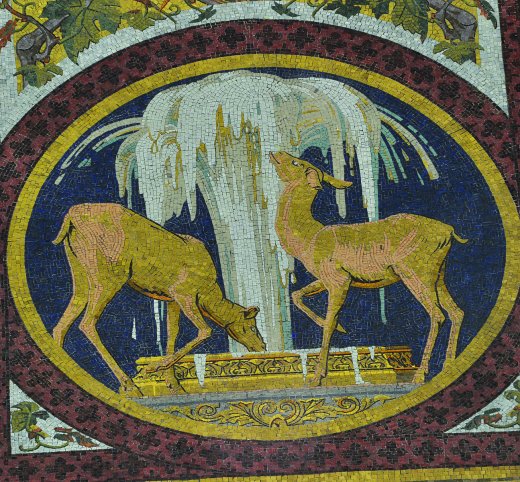 Snail Together with the several small animals represented in the stalls of the apse, where the Divine Office is celebrated at various times of the day, it recalls that all creation is called upon to praise God: “Let everything that has breath praise the Lord !” (Psalm 150) 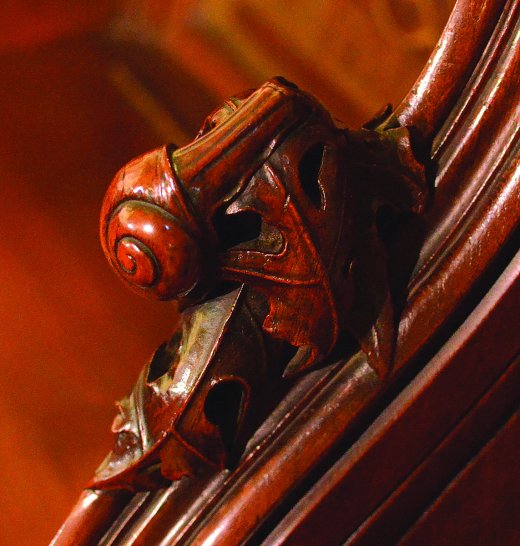 Pig Banished to the outside of the church in the form of a gargoyle, it represents the evil tendencies of the heart of man that Christ comes to purify: “There is nothing outside a person that by going into him can defile him, but the things that come out of a person are that defile him. (…) For from within, out of the heart of man, come evil thoughts, sexual immorality, theft, murder, adultery, coveting, wickedness, deceit, sensuality, envy, slander, pride, foolishness.” (Mark 7:15, 21-22) 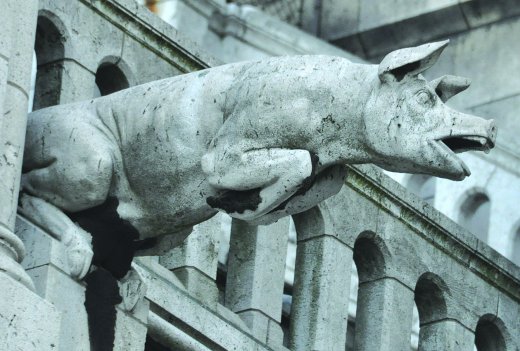